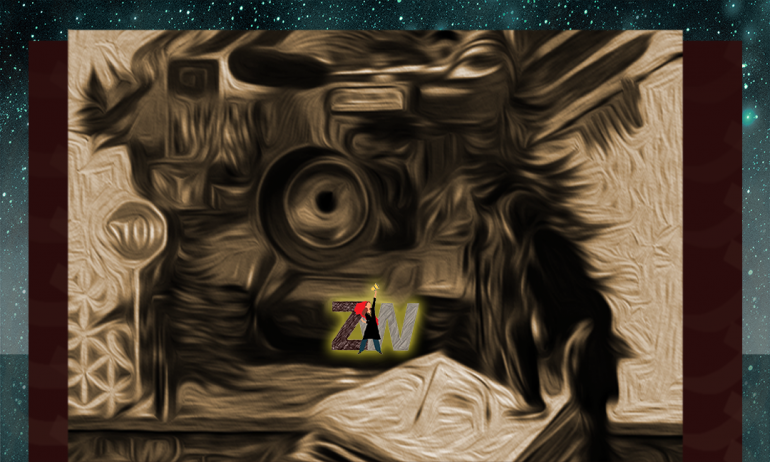 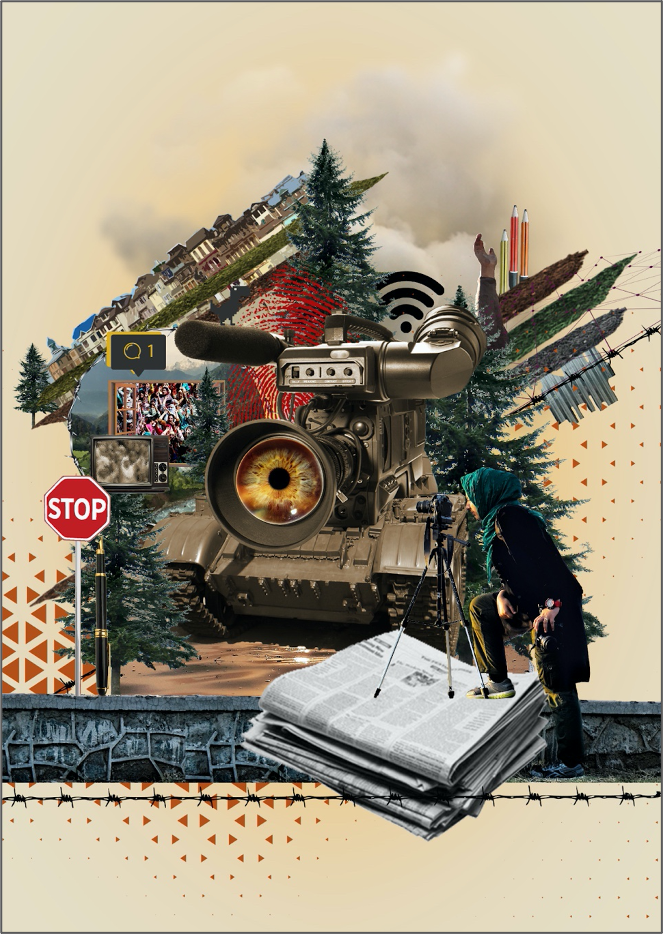 The Cover Art for ZW’s second issue is an attempt to engage with the theme, Militarized Media: Power, Propaganda and Press. This is a digital collage/illustration wherein the central focus is a ‘weaponized camera.’ Carefully placed on top of a military tank, the optical lens, posited as an extension of the barrel, symbolizes the expanse of militarized state control exerted on various forms of media in Kashmir. The camera also has a gaze of an eye which depicts the omnipresent, Orwellian surveillance that a police state exercises.

The ‘weaponized camera’ is surrounded by an array of elements, each symbolic of media repression and peoples resistance. Superimposed on a mesh of web, big data, an information clutter is scattered in the backdrop. It typifies the magnitude of data being controlled and used against Kashmiris. The red fingerprint is trying to invoke a sense of urgency around questions about the Kashmiri identity. This tussle is also present in the adjoining pen and the stop sign in the foreground.

In contrast, the pine trees stand upright, signifying life in Kashmir- an element carefully placed to remind us of the humaneness of the people’s struggle. A similar attempt is made through the line of houses, which represent the everydayness of life in Kashmir.

On the left side of the camera, there is a picture of the Kashmir valley with beautiful mountains, meadows, etc. This is the version of Kashmir that is sold to a large population to obfuscate the truth. Therefore, a window is strategically placed on top of this picturesque variant of the valley. A protest gathering can be seen through the window, displayed in an old black and white television. This distorted, colourless picture of the protest gathering is meant to highlight that the perversion of on-ground realities is not new; it used to happen on old tv sets as it does now in high definition. On top of this component, a comment bubble, with the number 1, illustrates how conversations about Kashmir are monotonous when the reality is much more complex.

On the camera’s mic sits the ‘no internet dinosaur’ to juxtapose the tool of speaking with its limitations. This element renders the illusion that there is freedom of the press, that people in Kashmir have a voice ineffective. The lack of internet and limited access makes even those with a voice voiceless- as they have nowhere to take it. Another such contrast is the full range Wi-Fi but yet again it is futile considering the hostile surveillance within cyberspace.

The structure of the camera sits upon a pile of documents and the waters of Dal Lake. This is to recall how honest and objective documentation processes have a direct militaristic weight on them—the information is almost floating on the light waters of Dal but is at risk of sinking anytime. An essential part of this artwork are the three bars in the backdrop- which are reshaped holes that the people of Anchar dugout on the roads in defiance of the arbitrary troop movement in the residential localities. These holes, dug to bar hostile entry, here perform the task of holding the overall collage together. Towards the right, a stencil of protest outlines three pencils next to a women’s arm held upright.

Noticeably, in front of the collage stands a Kashmiri journalist, with a camera significantly smaller than the central aperture.  Her foot unshakeably appears to be placed on a pile of newspapers- that represent the state narratives that the local media is forced to reproduce. The ‘small’ woman is standing defiantly in front of the big state apparatus.

This is a tribute to the undying, unyielding spirit of independent journalism in Kashmir. Despite the threat of punitive action, those who continue to speak truth to power. 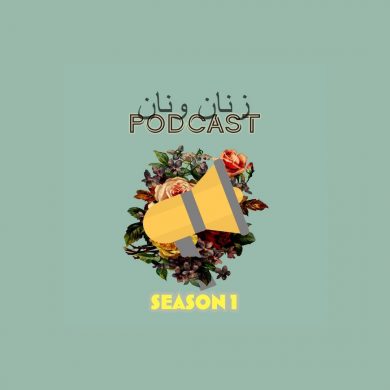