Cooking in Kashmir: The Story of How to Make Yakhni in Our Kitchen

Living alone in Delhi with my father, my mother did not get to spend too much time with her mother-in-law (my grandmother). In the recollection of her memories with my grandmother, one that she recalls often is from a late evening in the June of 1994 when my parents were visiting their home in Srinagar. 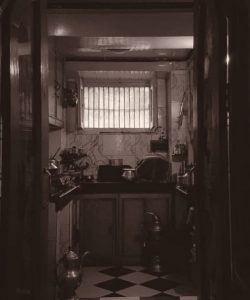 Known as an extremely strict woman, the naushe (daughters-in-law) were always on their toes in her presence. My mother was not used to life in warryuv (in-laws’ home) and especially the one- as she mentions specifically to the annoyance of my father, that was in downtown Srinagar. Poph-taeth entered the baithak (living room) and asked my mother to make Yakhni (a curd-based mutton dish) for my grandfather.

My grandfather, the headmaster of Islamia High School, was an intelligent but strict man. He was extremely particular about the food he ate, and even the slightest mistake in measurement led him to leaving the food untouched.  My mother entered the kitchen reluctantly, fearing the taunts that lay ahead if she fell short of the expectations. She knew how to make Yakhni, but her anxiety was palpable. My grandmother, one who was always looking out for her daughters-in-law, immediately came to her rescue and entered the kitchen. She stood next to her and told her, “wael, be havey” (Come, I will show you).

All the utensils were stocked in a pile outside the cabinets. They had been emptied out the day before by army officials during a search operation. My grandmother picked up a deechwaer (copper vessel) from the pile and put it on the gas stove. She put one kg of mutton with four to five cups of water, enough for the mutton to be completely immersed in water.

To the right of the stove, a blue shelf held all the spices she needed. She took four black cardamoms, one teaspoon ground fennel seeds, two bay leaves, two small green cardamoms, and a little bit of salt to add to the vessel. She asked my mother to look over the vessel and keep the flame on till the meat got tender.

She walked to the fridge and took out a zamutdoud waer (clay pot) which held around one kilo of curd. My father’s youngest brother was usually the one put on duty to bring the curd from our local ghoor (dairy farmer).  Much like kandar waan (bakery), women from my family were not allowed to go to the ghoor (curd shop).

While some spaces were inaccessible to women from before, most were made so post militarisation in Kashmir in the early 1990s. According to my father, grandmother loved going to Jama Masjid. She was in adulation of Mirwaiz Maulvi Farooq, and every Friday used to go to the Masjid only for his waaz-e-shareef (religious sermons). When he died, she cried for days- the valley mourned collectively. She eventually stopped going to her favourite place- first out of grief and then due to the growing masculinisation of the public spaces. As militarisation increased, and Indian armed forces occupied streets and spaces- she, much like other women in Kashmir, was confined to the home.

Zamutdoud as chhu dyun dun waryah, my grandmother ordered. My mother followed the instructions and took the wooden hand blender and started blending the curd till it was smooth 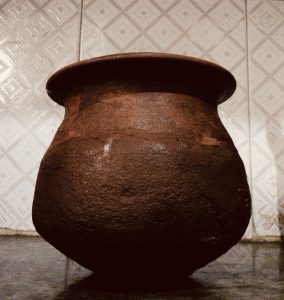 and there were no lumps. My grandmother picked up another deechwaer (copper vessel) from the pile, put it on the gas stove, poured the whisked curd in it. She turned the gas on and asked my mother to stir the curd till it reduces to half. Once reduced, she poured the cooked mutton along with its stock in the vessel. Just then, they both heard the azaan (call to prayer) and knew it was time for khoftan (Salat-Al-Isha).

While my grandmother prayed, my mother julienned three red onions. In a small pan, she put four tablespoons of ghee and fried the onions till they were golden brown and crisp. Returning to the kitchen after the fifteen minutes, my grandmother turned the gas, on which the mutton was simmering, off. They had to wait for the ghee, along with the onions, to reach room temperature before they could add it to the main dish.

In the meantime, my grandmother directed my mother to get the dried mint leaves from the cupboard on the right side of the baithak. This small cupboard was out of sight from the main entry- it was where my grandmother kept her favourite crockery. Kashmiris, specifically women, have a great love for their crockery- it is a topic of conversation and competition between families and friends. For my grandmother, the importance of guests was directly proportional to the crockery in which they were served, unlike the age-old Kashmiri hierarchy of determining worth on the basis of the food offered (serving tea and kebab to the most important and tea and biscuits to the unimportant).

My mother had packed the dried mint leaves after the leaves had been lying out in the sun on a tray for a few days and stored them in the cupboard dedicated to crockery. In Kashmir, one rarely uses store bought mint leaves. It is common to grow mint leaves in the backyard, a must in all kitchen gardens. The leaves are plucked and dried till they can be used in Yakhni (at least that is the only purpose I have seen it serve in my kitchen).

That week, my grandmother couldn’t bring herself to open that cupboard. Three days prior to the day of this story, a militant had attacked an army bunker on the road outside my house and escaped. The army officials were angry at the attack, but more so at the fact that he managed to escape.

It was routine for young boys to be sent to shrines as soon as news of an attack or suspected crackdown broke. Since Khaankah-e-Maula was close to my house, my grandmother used to send all her four sons to the shrine, fearing that they might be taken away, booked under false charges, subjected to torture, or undergo an ‘enforced disappearance’. That day was no different- as soon as my family heard about the attack, all the young boys ran to the shrine.

The army entered our home angrier than usual. They thought the militant might have taken refuge in our home, and searched fiercely for him. When they could not find him, despite the elders of my family telling them that the militant might have crossed over to the other side of the lane, the army started looking for arms and ammunition. It was evident that our house was facing the wrath of their masculine egos, and the kitchen was one of its victims. With their big boots, big egos, and big guns, they began their search (read: vandalism). They dug into our stock of rice grains and upturned it, opened all our cupboards, and threw everything on the floor. They stepped on my uncle’s university books and the religious books we had in the room. My grandfather, an extremely religious man who didn’t even allow family members to enter his room without wudhu – sat helplessly while they searched every corner of his room. Despite his disability, he was forced to stand so they could frisk him. My grandmother pleaded with them to be gentle and careful, but in vain.  Soon, realising the futility of this exercise and running out of bluster, they left.

The house was a mess- boxes of spices upturned, utensils strewn around, books half torn and dirtied.  My grandmother began tidying up, and in doing so her favourite crockery caught her attention. It lay broken on the baithak. She had saved it in a box at the back of the cupboard. Unable to bear the loss of her most prized possessions, she left everything as it was and went to her room.

Knowing her pain, my mother silently went to the cupboard, which was still in disarray, and took out the box of dried mint leaves. Once the ghee reached room temperature, my mother added it along with the fried onions in the curd and mutton mixture along with crushed dry mint leaves. Leaving the flame simmering, she cleaned the used utensils and shut the gas off in five minutes, knowing that the Yakhni was ready.

My grandmother took out a portion for my grandfather in a kaenz (copper bowl), where she had already put the boiled rice, and asked my mother to take it to him. In that small act of entering her kitchen and cooking, my grandmother broke an age-old stereotype. Despite continued external violation, she ensured that this space, her space, continued to be one of bonding, of camaraderie and companionship, a refuge against the violent realities of Kashmir. It was her act of resistance against all the forces that stood against her, and against all women in Kashmir.

Misbah Reshi is a law student at Campus Law Centre, University of Delhi and a graduate from St. Stephen’s College. She has contributed to various reports focusing on minority rights in India and human rights violations in Kashmir including Kashmir’s Internet Seige: An Assault on Digital Rights published by JKCCS and Majoritarian Consolidation, Everyone Has Been Silenced published by Citizens against Hate. She also wrote a chapter in the report ‘Disintegration at Gunpoint’ titled “Debunking the Colonial Discourse: Gender and Kashmir.”